MongoDB is a Document Store, currently used it as a key-value (document) storage.

Few years ago (2013-2014) i needed simple solution for storing uniform-type objects, at that moment MongoDB was pretty popular and got alot of reviews, everyone were hyping the NoSQL/MongoDB ease of use.

So i gave Mongo a try, installed 2.4 version and tested it with bulk-inserts & reads, the end-result looked pretty good

What i needed is a simple persistent document storage to store my json objects, w/o any analytics or reporting requirements. I installed Mongo on AWS EC2 instance according to official documentation. And so about year passed…

Week ago, while looking at performance metrics i saw MongoDB MongoCursor::next taking up to 10 seconds.

What the newrelic shows is sometimes fetching the data took 6,4 seconds!

As the software were not updated for last year, i did updated the server first thinking that would fix the issue

Easy #1 fix didnt do much, the requests still randomly took up to 5 seconds.

Then its time to refactor the application code, that came down to this code here

Obviously something else were causing the lag/delays in queries, and what that can be

Quickly looking at AWS Cloudwatch metrics showed <5% CPU usage, there were plenty of RAM free and disk usage was near zero. Quickly googling ‘mongo monitoring’ and looking into docs the MongoDB MMS was found, account was registered (its free) and monitoring agent installed. 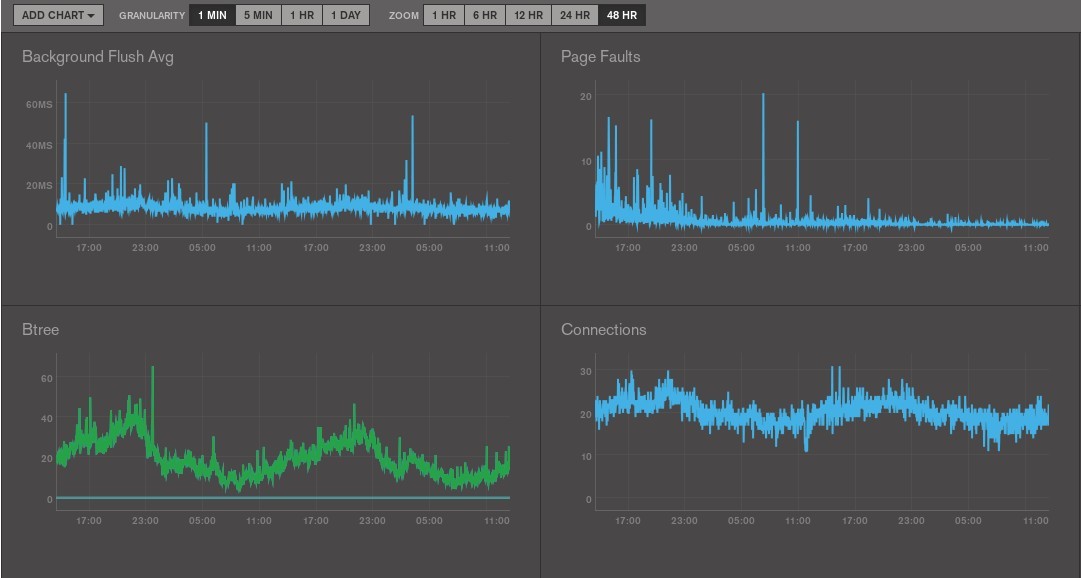 MMS Service didnt gave any reasons for query to take so long :( Going back to manuals the only clue left were “Locks”

What type of locking does MongoDB use?

MongoDB uses multi-granularity locking [1] that allows operations to lock at the global, database or collection level, and allows for individual storage engines to implement their own concurrency control below the collection (i.e., at the document-level in WiredTiger).

Looking into Shanty_Mongo_Document code i did found that the library uses

db.collection.update together with upsert option

and safe option to ensure data is written to journal

Nothing changed much on stats, but newrelic no longer traces the long-running 2-6 second fetch queries from MongoDB.

Looking at Opcounters, the overall number of “Commands” is the same, but “Query” and “Insert” numbers are lower.

and thats why replacing it with more simple insert reduced the locks.

the query/fetch still sometimes takes up to 800ms, but much less. 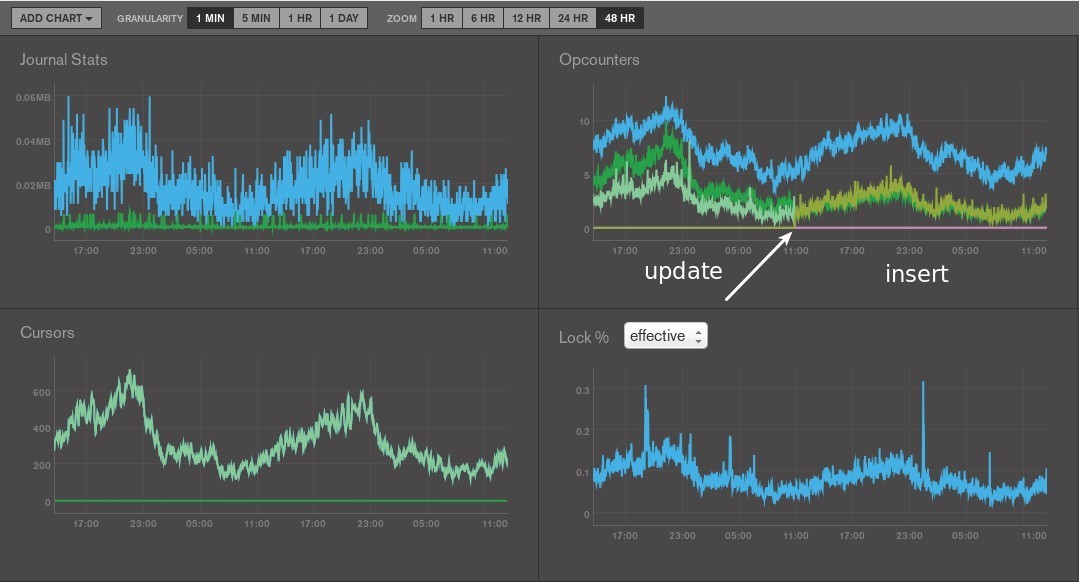